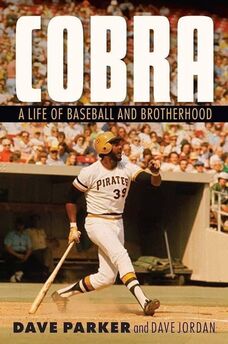 Dave sat down with Dave Jordan  over many months and detailed his career from high school to the Pros.

Every copy sold via the website benefits the Dave Parker39 Foundation and our Mission to help defeat Parkinson's!

​“For that period of time, he was the greatest player of my generation.”—Keith Hernandez

To Order use the drop down menu below to select item and type of shipping.
Dave Parker was one of the biggest and most badass baseball players of the late twentieth century. He stood at six foot five and weighed 235 pounds. He was a seven-time All-Star, a two-time batting champion, a frequent Gold Glove winner, the 1978 National League MVP, and a World Series champion with both the Pittsburgh Pirates and the Oakland A’s. Here the great Dave Parker delivers his wild and long-awaited autobiography—an authoritative account of Black baseball during its heyday as seen through the eyes of none other than the Cobra.

From his earliest professional days learning the game from such baseball legends as Pie Traynor and Roberto Clemente to his later years mentoring younger talents like Eric Davis and Barry Larkin, Cobra is the story of a Black athlete making his way through the game during a time of major social and cultural transformation. From the racially integrated playing fields of his high school days to the cookie-cutter cathedrals of his prime alongside all the midseason and late-night theatrics that accompany an athlete’s life on the road–Parker offers readers a glimpse of all that and everything in between. Everything.

Parker recounts the triumphant victories and the heart-breaking defeats, both on and off the field. He shares the lessons and experiences of reaching the absolute pinnacle of professional athletics, the celebrations with his sports siblings who also got a taste of the thrills, as well as his beloved baseball brothers whom the game left behind. Parker recalls the complicated politics of spring training, recounts the early stages of the free agency era, revisits the notorious 1985 drug trials, and pays tribute to the enduring power of relationships between players at the deepest and highest levels of the sport.

With comments at the start of each chapter by other baseball legends such as Pete Rose, Dave Winfield, Willie Randolph, and many more, Parker tells an epic tale of friendship, success, indulgence, and redemption, but most of all, family. Cobra is the unforgettable story of a million-dollar athlete just before baseball became a billion-dollar game.
​
Powered by